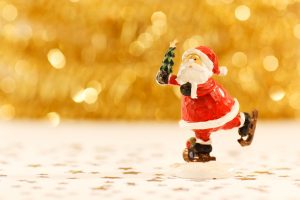 My brother and I discovered at a young age that my parents were the ones who “squeezed their way down our chimney” after we found a plethora of gifts hiding in the back of our 1971 Blue Dodge van parked in the garage.  It seemed as if “Santa” had arrived three weeks early and forgotten to lock the van door.

You might be saying—“but Jesus really lived, and Santa—he is just made up”. This is true.  However, as I started thinking about it, my faith in Jesus is about just as bizarre as anything that has to do with the Santa story.  Think about it: flying reindeer, a red glowing nose, workshops, toys, magic, elves, a bottomless bag, and visiting every home in one night is just as out of the ordinary as feeding a crowd of 5,000 with barely anything, walking on water, money in the mouths of fish, voices from heaven, angel visitations, a virgin birth, and rising from the dead,

Having grown up as a Christian for as long as I can remember, it’s easy for me to forget what Christianity may look like from the outside. I suspect that if we’re honest, many of the stories that seem normal to us appear to be in the same category as Santa from an outsider’s perspective.  In a culture that is no longer steeped in the stories of the Bible, it is good for us to remember that when we invite people to believe in Jesus, we are essentially inviting them to believe in an “enchanted” universe.   An enchanted universe is a stark contrast to a materialistic worldview that simply states: what you see is all there is.  Christians postulate that the material is not the whole story.  Instead, we assert that reality is infused with mystery, glory, spirit, paradox, truth, and invisible forces.  Faith is about helping people cultivate the openness to believe in realities “not seen.”

In a culture that wants to do our imagining for us, asking us to passively absorb an overabundance of images, we need to be intentional about cultivating a healthy and vibrant imagination.  A vibrant and healthy adult imagination is a childlike capacity to hold the possibility that maybe… just maybe… Santa does exist.  Children seem to have no problem imagining that dragons, fairies, monsters and unicorns, exist.  In fact, sometimes it can be difficult for children when someone older and “wiser” comes along and dismantles this belief in an “enchanted” universe where unicorns and God easily exist together.  This dismantling sometimes begins when an adult tells a young child for the first time that Santa doesn’t exist.  Yes, I admit, some of this needs to happen, but hopefully as we grow and mature, our faith is no longer a naïve and immature belief, but an expanded capacity to remember, imagine and believe.

So, if a child asks you this Christmas season if Santa exists – with a twinkle in your eye, and a slight smile on your lips, try responding with something like this…  “I don’t know but he could, he very well could.”

Our hope is that in these blog posts you would find a way to connect to the beautiful story Jesus Christ invites us into. The questions that follow are a way for you to reflect on the post throughout the week and a way for you to join in conversation with those around you about the ways you are encountering God.

1 thought on “Why I Believe in Santa Claus”