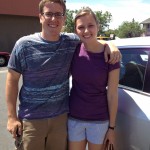 How do you know if you’re “in God’s will?” How do you know if the future you imagine for yourself is the future God wants for you? These and other questions stretched our minds and hearts as my wife and I visited Northern California this week. We spent four days each in the Bay Area and the Sacramento area trying to discern if and where God is calling us to plant a church in those regions. It was a delightful but exhausting process. We tried to discern our fit with a huge array of communities, tirelessly examined our motives for desiring (or not desiring) to plant in a particular city, read stories of calling in the Bible, and prayed. We prayed a lot. We wanted to hear from God.

On Friday, we took the day off to do just that. It was our Sabbath: our day of ceasing from the busyness of vocational discernment in order to pay more attention to God. Hiking through the John Muir Woods, we came upon Cathedral Grove. We entered in silence, staring up at redwoods taller than the sequoias, listening to the God who had planted them millennia before and was present among them now. By the time that section of woods was done, we had an unspoken agreement: our hike would continue like this for some time.

About 3 miles in, at a critical juncture in the trail, Steph shared something like “a word from the Lord” she had received. Most of the time we might dismiss it as mere insight, but we had been listening. She told me she had just been thinking how much she would have liked to have a map (better, a GPS) so we could know exactly where we were, where we were going, and how much distance we had left. Wouldn’t that be nice? But all we had was the trail in front of us and the memory of a sign pointing us in that direction. Right as she was thinking that, we approached the next sign: “ß — Ben Johnson Trail.”  It struck her that God may be telling us that all we get sometimes are signs…not maps.

It strikes me that it’s possible to hope for an audible command from the Almighty in order to remove all ambiguity, so that we won’t have to trust in him going forward. In his grace, God hasn’t so far let us fall back on our spiritual GPS. We did not get a map of our church planting future on our trip to Northern California. But I am pleased to report that we did run into a couple signs along the way, and we’re excited to see what’s around the corner on the trail ahead.

1 thought on “Give Me a Sign!: The Will of God in the John Muir Woods by Kyle Brooks”